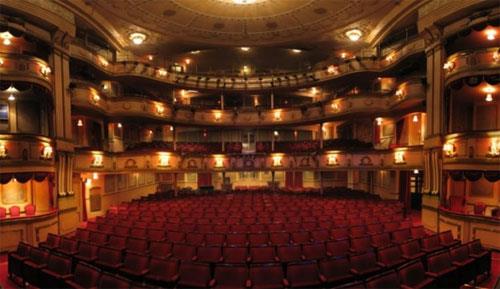 January was a stimulating month in the theatre, featuring both classic plays and new musicals. 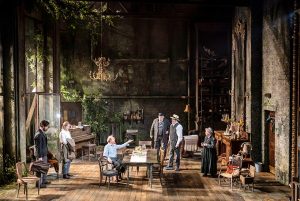 Uncle Vanya – Harold Pinter theatre, adapted by Conor McPherson, directed by Ian Rickson (30th January)
A stellar cast leads a very enjoyable and stimulating, if flawed, interpretation of the Chekhov classic. Toby Jones as Vanya gives a wonderful comic turn that drives the show – this is the funniest version of the play I’ve seen – although his house cynic is perhaps conceived at the expense of the character’s more mournful misery. The modern language of Conor McPherson’s new adaptation, if occasionally jarring, makes the characters more immediate and relevant, and his turning several confessional speeches into monologues directed to the audience further helps to elucidate character and engender empathy. He also effectively heightens our attention on the limited prospects for the women characters, who are entirely dependent on financial protection from men. Aimee Lou Wood gives a heartbreaking performance as Sonia whose devotion to Doctor Astrov is overlooked, although to nitpick, she is miscast as she is far from plain looking, making the Doctor’s inattention difficult to credit. Rosalind Eleazar as Yelena has all the attributes of a modern independent woman, but not the privileged languor in her idleness to warrant the Doctor’s chastisement or accentuate the class disparities. There is an underlying sense of potential social revolution in the portrait of the enfeebled aristocracy along with references to the local deprivation. The stage design suggests the play is set in a period slightly later than its late 19th-century origins, perhaps shortly before the Russian revolution, although this is not explicit. The architecture of the house feels part of the modern industrial age so is not historically detached from our own. The foliage from the house garden literally overwhelms and penetrates the building, underlining the environmental themes that McPherson draws out of the play to telling effect. Doctor Astrov’s impassioned warnings about the disappearing local forests and wildlife could have been written for our times, and their collective hope that the world will have resolved such problems in 100 years’ time rings rich in irony and foreboding. Finally, Chekhov was a master at writing a full ensemble of real characters with their own hopes and dreams, which are beautifully realised here by the excellent supporting cast. 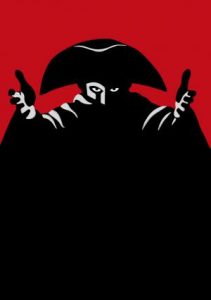 Amadeus by Peter Shaffer – Teddington Theatre Club, Hampton Hill Theatre (28th January)
The Teddington Theatre Club is a thriving local amateur group that mounts ten shows per year in their home at the Hampton Hill Theatre, which houses a lovely 200-seat main auditorium as well as a studio space with flexible seating for 50-60. I first encountered the group as a active customer at Samuel French, and they allowed me to visit them to learn more about how they operated as an amateur society. I was very impressed by the extraordinary commitment of a great many people to making theatre on a voluntary basis, and by the quality of their work. To declare an interest, I have recently been invited to join their play selection committee which provides me a nice opportunity to read even more plays!

And so to their current production, Amadeus. This is an exceptionally good production, with a strong cast throughout, which is not always the case in amateur theatre. The three leads were particularly good. The role of the exuberant and childish Mozart is a potential banana skin for lesser actors, but Ian Kinane was true to both Mozart’s brilliance and to his despair as he succumbed to obscurity and madness. Steve Taylor brought the required bitter authority to Salieri, and Trine Taraldsvik beautifully captured the innocence of her partnership with Mozart as well as her sad worldliness. I should also commend the splendour of the costumes, which for an amateur production were wonderfully luxurious. Finally this fine, clear production reminded me what a wonderful play this is – so expertly structured around the central theme of artistic talent and worldly success, with complex and moving characters – not to mention the sublime music. A real triumph of local theatre making. 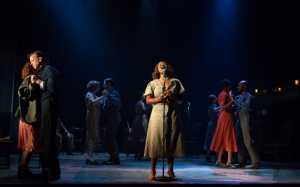 Girl from the North Country – by Conor McPherson, with music by Bob Dylan – Gielgud Theatre (23rd January)
When I first saw this show at the Old Vic two years ago, I was both bewildered by its form, yet bowled over by its beauty. It is described as a play with music. On my first encounter I thought that the play seemed somewhat slight and disconnected. This time around, perhaps because I already knew the main plot lines, I found the range of stories held together better, the characters sharing common hardships and heartaches. The music is not incidental; the excerpts of the Dylan songs are the real heart of the show, amplifying the dramatic and emotional truth. I knew many of the selected tracks, which made the ravishing new arrangements all the more impressive and moving. I have read recently that neuroscientists have identified an increase in cerebral blood flow in response to music that is akin to feeling “chills”. The piercing vocal performances certainly provided a number of thrilling moments. I also loved the way that the ensemble cast played, sang and danced throughout in support of the successive solos, affirming the sense of community and the universality of their predicaments. The particular groupings of only men and women as they sang, further highlighted their different perspectives and challenges. The moving finale, from Forever Young, felt like a suitably gracious and heartfelt benediction for both the characters on stage and everyone in the audience:
May God bless and keep you always
May your wishes all come true
May you always do for others
And let others do for you 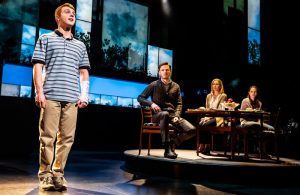 Dear Evan Hansen – Noel Coward theatre (15th January)
The Tony-award winning musical from Broadway. It is a unlikely story about a lonely high-school student who in the wake of another student’s suicide claims falsely that he had a close, secret friendship with the dead boy, and thereby finds himself welcome into the latter’s family and newly popular at the centre of the growing media storm. That it deals frankly and touchingly with mental health and the challenges for sensitive adolescents to navigate the virtual social world is admirable. The music is effective in sketching out the emotional landscape, and Sam Tutty’s performance in the title role is astonishing: he captures Evan’s painful awkwardness in every detail while delivering rich and powerful singing. In the end I felt that there was something slightly unsavoury about the show’s dependence on the teenage suicide as its inciting incident, and in plot terms the consequences of Evan’s behaviour are glossed over, so that I was ultimately not wholly convinced or emotionally engaged by the show’s story. 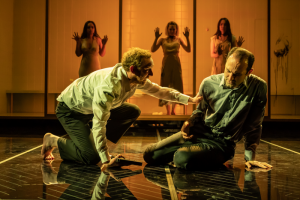 The Duchess of Malfi – by John Webster, The Almeida (9th January)
Oddly I had never read or seen a production of The Duchess of Malfi. It was written in 1614, two years before Shakespeare’s death, and although the production used the original language, it was very modern in style and perspective. It is directed by Rebecca Frecknall, who had previously directed Tennessee Williams’ Summer and Smoke at the same theatre, which I thought was beautiful. The play is a bloody, period tale of revenge and madness, which here was played with the suspense of a crazy, psychological thriller. Notoriously the eponymous heroine is murdered well before the end, but Frecknall emphasises the inescapable devastation of men’s power over women by allowing their ghosts to haunt the corrupt men as they go on to meet their just ends. The set design was strikingly modern, until the excessively gory final tableaux, which for a thrilling moment could have been a Caravaggio set-piece. Lydia Wilson as the Duchess was wonderful, defiant yet resigned to the odds stacked against her. 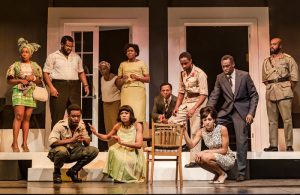 Three Sisters – adapted from Chekhov by Inua Ellams ,The National, (3rd January)
Inua Ellams wrote the hugely successful Barber Shop Chronicles, which I’m sorry that I have not yet seen. His version of Three Sisters transposes the setting to Biafra during the civil war there in the late 1960s. For me Biafra is synonymous with African famine, and it was very interesting to learn more about this dramatic period in Nigeria’s history. However I think that the thematic tone of Chekhov’s play did not fit as well in this context. The overriding ennui that the sisters feel in their isolated Russian estate as a product of boredom was not replicated here, as they are actively caught up in the maelstrom of the horrific civil war. It is only when this distraction is over that the full sadness of the sisters’ disappointments is felt, particularly with the death of the youngest sister’s hopes with the killing of her fiancé.